Renting an Apartment vs. Owning a Van

In Philadelphia it was 2015. I still had a wife and a lease. I had a downstairs neighbor who complained about noise, even though I didn’t make much. She would also play music loud, and smoke clouds of reefer, which would enter our apartment through sheer force of will. The air in her apartment would reach critical mass, and weed smoke and music would escape through the vents and the floor.

I never once minded her smoke and her music. I like both of those things very much. What I hated for sure was seeing her face. She was young and stoned and should have been happy - at least once, or better once in awhile. Instead, she wore sweatpants and a scowl. I dreaded coming home or leaving at the same time, because it was always a guaranteed glower.

Being a proper Philadelphian, I should not have cared. It was my job to not give one fuck. The proper reaction would be “fuck that dumb bitch” - but that sentiment is hardly in my vocabulary of feelings. I let this bother me endlessly, as I waited impatiently for the lease to end.

Now I am back in control in a van. I missed this intensely and for a good reason. This feels like home. I own this and make my own choices. If I don’t like the weather or neighbors, I move. Last night I parked at the top of this tropical island. I parked in my usual place on the street.

High winds howled and rocked the van. I used my multi-tool's corkscrew to pull the cork from a bottle. I love the album that was playing. It was late at night, and I felt inspired. I reached under the curtain, and increased the volume. I took off my shirt, closed my eyes, and I danced. Not a reason on the planet not to enjoy these small moments. Not a person to care or complain. 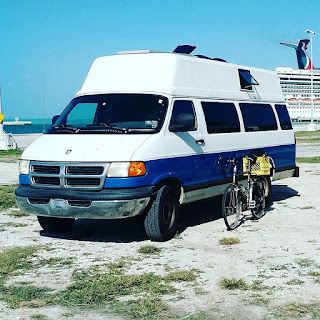