I bought a van today. It was $700 plus tax and tags. It was posted on Craigslist for $800, but I'm a smooth character. I got another hundred bucks shaved off a price that I believe is already bordering on suspiciously low. 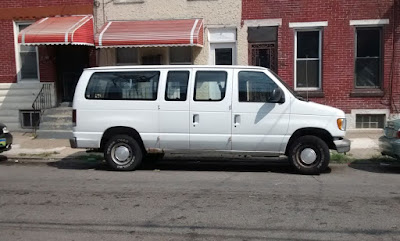 I've been looking at vans for a few months, and recently began looking for vans, taking an "eyes opened" approach to finding my next one. Being in no particular rush is helpful. People get great deals all the time. Great deals exist. I like to be proactive - ready to act quickly and decisively when the time comes. This is different than being spontaneous, but it feels the same, and sometimes it's hard to tell the difference.

Then: I found a promising ad with no outright deal-breakers. I found what appeared to be an undervalued van that would suit my needs.

I called the seller, Don, and confirmed that the van definitely does run, and if interested, I would definitely be able to drive it away. He told me yes, and then explained it also had an exhaust leak. Still undeterred, I set an appointment to meet the next day.

This morning, I wanted to leave reasonably early. A van for $800 that runs and has low mileage is bound to get a lot of interest. I wanted to be first in line, because there might not be a second place, and nobody can be trusted to keep an appointment made through Craigslist.

Kristin and I headed north. We left the beaten path, and continued on small roads. We left familiar territory, and arrived in a small town tucked out of the way and surrounded by farmland in every direction. As we pulled up to the location, I realized it was a used auto dealer. That raised my hackles, because I thought this was a private sale, I was hoping that the van was simply undervalued by the seller, or the seller needed cash quickly. My chances of getting a great deal from a used car salesman seemed less. Then again, $800 isn't an absolutely insane deal for a vehicle that needs some work, and somebody just wants it gone. If it was as described, I was still interested.

I called Don, and he met me in the parking lot across the street. The van was already running, which I took as a bad sign. It isn't customary to leave a vehicle running and unattended while waiting for a prospective buyer. Probably it wouldn't start without a jump, and Don didn't bother to mention that. The exhaust leak was apparent when you hit the gas, but the engine seemed to run quiet enough. Kristin hopped in, and we took it for a short test drive. The brakes and steering and whatnot seemed to function properly. I drove back to the lot and turned off the engine. I twisted the key in the ignition again and got ClickClickClickClickClick... So something's going on there. I'm no mechanic. Battery? Alternator? Starter? Who knows. But it was still only $800, and the fundamentals seemed to be in good working order.

I wasn't planning to bargain down an $800 van, but I ended up doing it anyway. "Ehh... I don't know... would you take $600?" Don came back with $700, and we shook. I heard him talking to another interested party moments earlier, and I don't know why he didn't stand firm on the price. I would have paid it. Even with mechanical issues, market value is still much higher.

We went to the office and got the paperwork sorted. The van was jumped again, and Don reminded me not to turn off the engine when I stop for gas. Don looked less than sure that I'd make it back to Philadelphia, but I don't know whether he thought it was me or the van who might fail. All I know is I have a trusted mechanic in Philly, and a AAA Plus membership. Even if the van didn't make it for some reason, I could get it towed the rest of the way for free. Worst case scenario: I'm selling a working van in Philadelphia for an almost certain profit. This deal is somewhat of a gamble, but I am comfortable with the odds, and confident of a good result.

I dropped the Club Wagon off at Bill's, and I will wait for his call to get the straight dope on what it needs.
Posted by Pixy Stoneskipper at 5:11 PM 15 comments: