This next Amazon payout looks like it's going to suck. Our payouts haven't gone below $1,000 for awhile now. We've been getting about $1,200 to $1,500 every two weeks pretty consistently. That's what we're grossing before expenses. It's been good, but not great. Part of our comfort at this income level is because we aren't paying rent, and we will hopefully never have car payments. Well. The next payment is scheduled for the 8th, and it's just creeping over $600. Not so good.

We might push back our unscheduled-anyway departure date to save some more money. I have some meager savings, but I'm also trying to feed my Roth IRA, and I don't want to rob my own coffee can to pay for gas and food. I also have my van up for sale on Craigslist, and it would be nice to get that dealt with before leaving. (Anybody need a van for $900?)

I got an email from George, who has been reading this blog sometimes ever since the first time I went to Key West and was living in the aforementioned van. He said he's headed down to Austin TX soon and we're welcome to visit him at the living structure he's built that has a docking port for the step van that he's been living in for years. (Did I mention that this man is awesome?) Well, I don't have much of a clue what I'm doing on this trip I keep talking about, so stopping by Austin on our way to California sounds like a concrete idea. After exchanging some emails throughout time, it'd be great to finally meet more good humans and see what they're horsing around with.
Posted by Pixy Stoneskipper at 9:29 AM No comments: 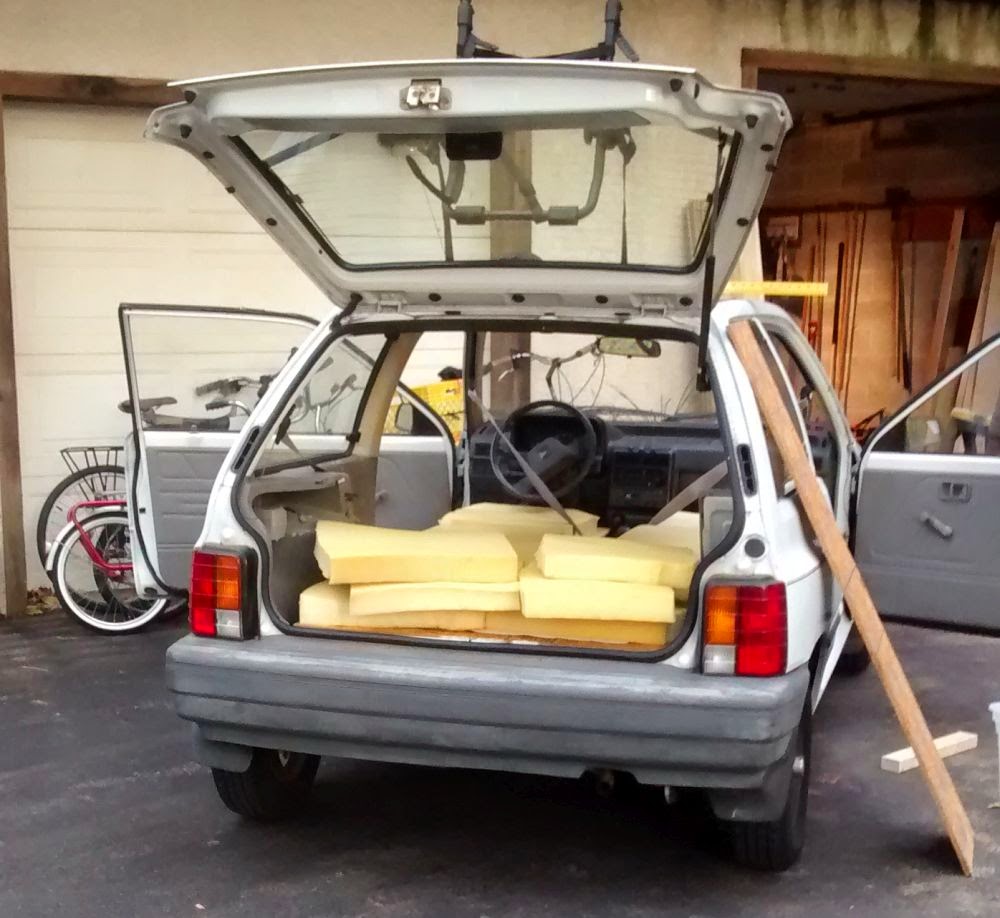 Posted by Pixy Stoneskipper at 9:29 AM No comments:

I started taking another pill. It's supposed to help with Seasonal Affective Disorder. I've always hesitated to take any medication for anything. A headache would have to be pretty bad before I'd consider an Aspirin for it. None of that stopped me from fairly heavy drinking throughout my 20's, which ironically was largely about self-medication of all the underlying unrest that I was so hesitant to take meds for. That's how I've come to see it anyway. That's my current mental framework.

Anxiety, ADHD, Seasonal Affective Disorder. It's a lot to overcome for a guy whose self image is that of a happy-happy goofball. I used to handle all those brain issues better before I was an adult. Before I was 18, I couldn't very well move to escape the malaise and discontent brought on by winter. ADHD was no problem, because I could easily scrape by in school. My aim was only to get my diploma, and I could do that in my sleep. I basically did. With my life laid out in front of me, and little choice about where to live or work, the anxiety issues were not as pronounced as they would later become.

In my 20's I began to have choices. ADHD is absolute hell when you have an office job. It is absolute hell to be employed doing anything I do not have a personal stake in. Seasonal Affective Disorder raised questions - like WHY AM I STILL HERE THEN? Meanwhile, I drank and drank and drank. I told myself I was young, and young men drink. I always knew it was bad practice, and I often thought I would have trouble hitting the brakes. At 29, I quit. Three years have passed.

I used to think humans were good. In aggregate, I thought there was more natural good, and that time and science would lead humans to repairing the damage that we do to each other and to the Earth. I no longer believe this. I think that view is naive. It's a nice story that we all use to justify our existence and make ourselves feel better. The truth, I believe now, is not uplifting. Humans are an invasive species. We are the greatest threat to our own planet, and almost every activity we engage in feeds a system of greater overwhelming destruction. I believe this, and somehow I have to be okay with this.

The sun is setting earlier every day. The fall weather is beautiful, and still I feel the deep rattle of uncertainty creeping over me. People take drugs for this. As I said in my opening, I've always been resistant to those medications, but now I am ready to reevaluate. I started taking something for Seasonal Affective Disorder, and so far it's a success. I feel like myself. Everything will be fine. I don't have to do a damn thing in life, I am basically powerless to fix our species' greatest problems, and for the moment that's okay. I can sit on the sidelines for a minute and think.

I want to take time out to research more philosophy. People have had all sorts of disturbing thoughts and theories about the Big Questions of life. I'm ignorant of the bulk of philosophical thought, and I think I have a lot to gain by exploring the questions and theories of the smarter people before me. I need to take time to sort my own life out before I can help others the way I have always wanted to. Somehow.

My views on life and Earth and god and humans have been evolving rapidly over the past three or four years. I've spent too much time rolling my eyes at myself. I've felt too disappointed that my species isn't as great as I used to believe it might be. None of that is the critical matter at hand. I have to continue in a straight line forward through time. Time will not speed up or slow down, so I am tasked with the mission of learning how I can pass my time with the smallest amount of suffering. I am better when I am positive. Happiness and positive thinking is healthy for me from a selfish perspective, but that same positive attitude is a necessary platform if I ever want to help others. I want to be the buoy; not the anchor.

Today, I am well. The leaves are half fallen, and the leaves remaining on the trees create a beautiful filter for the gentle fall sun. I have every ingredient I need for a satisfied life, and most of the work is either complete or under way. Everything is fine, and the future holds an almost certain improvement of circumstance.
Posted by Pixy Stoneskipper at 10:11 AM No comments: