Oklahoma City: A place to pass through.

We woke up outside a well-stocked Walmart. The sound of trucks and trains did not stop during the night. It was what some folks would call “loud,” but I was pacified. Sound sleep. Kristin reported the same. When you’re not spending money to sleep, you don’t feel like anybody owes you silence.

We stopped in Oklahoma City. We went to a dog park where you could land jets inside the fence. It had its own zip code. The mayor is a dog.

We found a place that knows how to make a sandwich, so we split the proceeds. I asked the counter person about living in town, and was surprised to be regaled with accolades. (But he'd still leave if he could.) What I thought was a flat hot fart in the desert turned out to have redeeming qualities. The block we were on had hip businesses - young owners with proper politics. There’s at least one positive enclave in that city, and maybe more if you take time to look.

We opted to head west instead.

Here is what we saw: 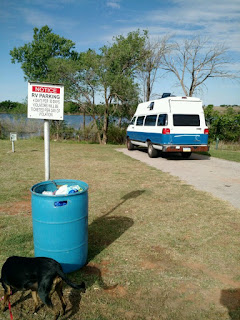 Chris it's good to see you guys are following through with your plans of travel. Could you write a little bit about your travel plans if any are you going to follow the weather are you going to do some work camping xcetera is this an open-ended tour or do you have plans to return to Philly at some point and anchor down again?