My future and the Flying J.

We made our exit from Oklahoma, and traversed Texas through the tip of the panhandle. We stopped to buy books in Amarillo, and eat a burrito down the street.

Onward to New Mexico, and we entered better desert. Mesas rose in the distance, and abandoned structures and vehicles lined the highway at intermittent distances.

Driving into New Mexico, I daydreamed of having a square of dirt to store my partial cars. I can imagine myself, one day, with a bright white beard, and sun-cooked skin. I will sit on a mattress on the edge of a bread truck; raised up a few feet and tied to concrete. I will sit on the edge of a hole I cut in the side, and gaze out across interstate four-zero. I will thumb to town for bread and whisky; a small solar panel will run a tape deck, and I will have three tapes - it doesn't matter which ones.

Either that, or I'll run a non-profit in Oregon. It won't be registered as such, but being the skilled business person I am not, that is what's written in the cards. Oregon will feed me, because that is what happens there.

Back in the past

We approached potential free camping in San Jon, only to be amazed by the structures, and disappointed with the lack of beer. It looks like San Jon used to be a town, but now only skeletons remain. We made two loops down main street, then drove twenty minutes to a Flying J. 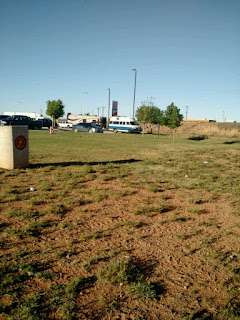