1997 Diamondback Outlook. On the road again, my style.

I stayed late at work today and performed most of a complete overhaul on Tall Cool - my 1997 Diamondback Outlook. I installed new brakes, shifters, handlebar foam (yes), and handlebars. I swapped cranks, wheels, saddle... it was an in-depth project with the purpose of bringing it back to the state it was in when I loved it the most. I was apprehensive that even after all of the work I would end up still not enjoying it as much as the Bridgestone I've been riding. Emotionally and sentimentally speaking, Tall Cool is my number one bicycle - but I was afraid that my preferences might have changed to technically prefer another bicycle. If so... c'est la vie... but today's project was to rebuild my friend and return this bicycle to glory. 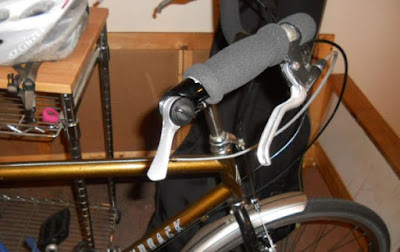 Here is a picture showing my unique new shifter setup. I used Jagwire shifter pods that mount externally on the ends of the handlebars. They are designed for Shimano bar-end shifters on time trial bicycles, but the square-shaped mounting interface works with these old Suntour downtube shifters. Technically, I have the front shifter on the right operating the rear derailer, and I'm using the "rear" downtube shifter in friction mode to operate the front derailer. It's all friction shifting; works great. The front (now 'rear') shifter uses Suntour's 'micro-ratcheting' internals that have seen a resurgence in popularity due to Rivendell bringing them back into existence and talking them up so well. My setup was a cheap-as-hell version. (I pay cost for parts and frequent swap meets).

Also visible in this picture is the "old man handlebar foam." This is the foam handlebar covering that you see geezers rocking on cruiser bicycles. I put it on as sort of a goof, but I also suspected that it was comfortable. Also, I heard Freddie Hoffman uses it. 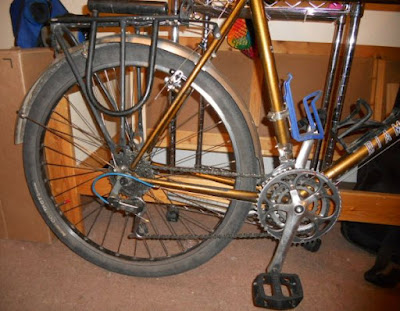 Here is a picture of the back part of the bicycle showing several things. 1) my cool solution to not have a second water bottle cage: hose clamp the metal part of a Minoura handlebar-mounted conversion unit. 2) nice Sugino cranks that I got for $25 at a swap. 3) u-lock storage on a rear rack. 4) big-ol' Eastern platform pedals that I now love. 5) original "7 SIS" Shimano derailer. Works perfect.

Also, barely visible, are the new Tektro cantilevers that I think are the best brakes I've ever used.

Unfortunately, my high gear on the cassette can't be used because it's too close to the little clamp that holds the derailer hanger in the frame. Tall Cool has an admittedly cheap old setup, and wasn't made to work with 8 (count'em) gears in the back. So I limited the small cog out with the limit screw on the derailer. It also seems as though the second highest gear is worn out, so it pops when I put any real pressure on the pedals. With a 36 tooth middle ring, that doesn't provide the most useful gearing. It's too low. I plan to get a new cassette and swap the chainrings to a 40t middle; 46t large. (Now it's a 36/50).

In conclusion: it's almost there. As soon as I rode the bicycle again it felt natural and wonderful. I love my position on this bicycle, and am happy and satisfied that it is still my favorite. I will work out the slight mechanical hindrances, and my friend and I will roll along for many more miles, my friend.
Posted by Pixy Stoneskipper at 6:51 PM