I left work about an hour early to go to Two Piece Fest.

This warehouse show boasted 22 Bands, all with two members each, starting at 2pm. All bands had 20 minute sets, and there were two stages for quick changes between bands. There were posted schedules, and the times were adhered to like clockwork. There was an intermission at 7pm that gave me enough time to partake in free food that some housemates had prepared, and still ride a bicycle home, smoke mad weed, and get back in time for more music.

I left work at 3:30pm, and picked up a case of MGD on my way. I dropped off half the case at home, put the rest in my backpack, and headed to the show. It was a highly enjoyable time of music and all-day drinking. Probably hundreds paid to get in. I can't count, but it was a successful show. I was hoping to see the band 1994!, but the cops shut everything down a few hours early.

I was fortunate to witness the set of Peter & Craig who wore huge paper mâché masks decorated as caricatures of themselves. Well executed, and I also liked the music. 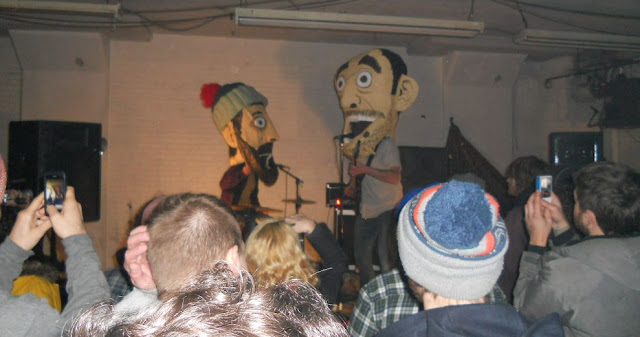 Posted by Pixie Morningdust at 1:02 PM