Three Piece Fest 2011 occurred at the Danger!Danger! Gallery all the way in a different corner of Philadelphia. I brought the other half of that MGD case from yesterday, and headed over with Tara in her car.

It was a success. There were plenty in attendance, and it got hot, crowded and full of energy. I brought plenty of pot to share if anybody wanted it. Not as easy a sell as I thought. Every time I'm at a house show and someone is smoking pot, I think "gee... I'd like some of that." Maybe people thought I was a cop with rainbow socks. One person did not hesitate.

Here is a photograph. Yesterday, I mentioned seeing Peter & Craig at Two Piece Fest. The same Peter is also in this band, Algernon Cadwallader. They played last, and everyone got batshit. 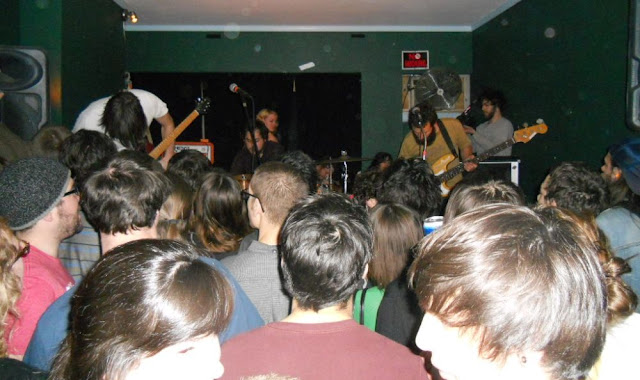 Posted by Pixy Stoneskipper at 1:29 PM