Have you heard of Clive Cussler? I sure have. Clive Cussler is a paragon of the prolific novelist. With all of the various titles and editions, hardcover and paperbacks (trade and mass-market) available, there are a virtually endless number of variations. This is excellent fodder for the prospective collector. I am a perpetually prospective collector. Many sub-collection criteria can be chosen, and visually appealing display options abound. Perhaps most important, the books are generally affordable and there are many opportunities to hunt for a new find.

I've been considering a Clive Cussler collection for years, but other projects have taken precedence. I had ten or so mass-market paperbacks at one point, and the total dwindled to four as various copies went who-knows-where. A month ago, I attended a tag sale at the Kennett Area Senior Center and observed many Cussler books for sale. They were $0.50 for paperback, $1 for hardcover. I bought none. The decision haunted me.

I was still sore from this failure to act when I saw a sign for a Lion's Club book sale in Avondale, PA. I attended the sale ready to buy. A sign posted in the wide entrance of the large white barn read "Books. $5 per bag." Bags provided were of the plastic Acme Markets type. You can get a lotta books in that bag.

I took my first bag and proceeded to dip my dragnet into the sea of disorganized paper. After filling my second bag to a barely-fair overflowing, I was informed that the sign was incorrect. The $5 sale was last week, and this week was $0.50 per book. Perhaps to avoid flummoxing me, the senior-in-mesh-hat in charge told me they would honor the mistakenly-posted sign. I filled two more bags. I developed a method of bag-filling which involved both physics and material science. The size of books and order of inclusion were taken into account. When complete, each bag was a thin film surrounding a cube of tightly-packed Cussler. I could fit a thumb and the tip of a forefinger between the two looped handles while supporting the load from below. That is how I define a full bag.

The musty barn smelled of yellowing paper and the wide beams creaked under the weight of many tomes. I systematically scanned each row for Clive Cussler, passing over countless Kings, Crichtons and Pattersons. Dick Francis, John Grisham and Robert Ludlum were not on the menu. I passed over these as I assembled stacks of Cussler. I worked for an hour in the quiet barn as four senior Lions manned the bags and the cash box up front.

I completed my final bag of paperbacks and asked "how much are the hardcovers?" while gesturing to the side-room of alphabetized early editions. The response: "fill a bag." And so I did. I ended with six bags. A ten and a twenty changed hands, and I took four trips to my van.
Later inspection revealed that I had obtained all but three titles in the "Dirk Pitt Adventures" series. I had nearly complete series of the Numa and Oregon Files. I found several first editions and picked up many doubles (some as many as five copies.) In total, I hauled away 96 Clive Cussler books. The four at home made an even one-hundred. 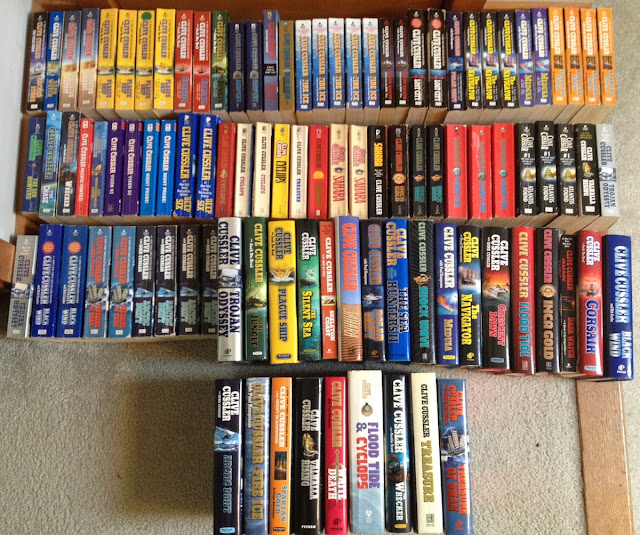 Anybody seeking Cussler at this barn sale will leave severely disappointed.


More about Clive Cussler:
Clive Cussler has written or co-authored 60 books. He started in the 1970's and he has more books waiting to be published even today. Visiting a garage sale or thrift store will dredge up cache after cache of his dusty paperbacks. Clive Cussler focuses primarily on maritime adventure books written in a series. His original series of novels features "Dirk Pitt." Pitt does not have superhuman powers, but somehow remains unscathed from involvement in some pretty nasty situations. They aren't supposed to be believable. You're supposed to read them on the beach.

In addition to the Dirk Pitt adventures, Clive Cussler has created the Numa Files and the Oregon Files. These are the Rhoda and Phyllis to Dirk Pitt's Mary Tyler Moore Show. These series feature cameo appearances from the Dirk Pitt novels and focus on the adventures of an overlapping cast of characters.

Still further - (in his free time?) - Cussler has been working on two additional series: Issac Bell is a fictional hero of the early 20th century, and the Fargo Adventures tell the story of a fictional treasure-hunting couple.

Along with names like Stephen King, Michael Crichton, and James Patterson, you will find a staggering number of Clive Cussler novels in any given used book store or book rummage sale. My aim is to collect them all. Failing this, I will at least have a collection of note. (I have a policy of setting my bar of achievement ambiguously to ensure success throughout all of my projects.)
Posted by Pixie Morningdust at 2:11 PM

Great Haul! I love Clive Cussler and think I have read every Dirk Pitt novel along with some of the Oregon files and others. Enjoy

I've read a handful of them in the past. Now I'm starting with "Pacific Vortex!" and going through every series. Book reviews to follow.

There are some huge book sales coming up, and I'm preparing to build another outbuilding to contain my Cussler supplies. It will be modeled after a ship and supplied with meager rations.