I've been looking around at cars for awhile now. I've been researching (ie: not sleeping) and waiting for something perfect. I want it all. The car must be fuel efficient: 35mpg highway or better. It must be easy to work on: I want to perform my own repairs and maintenance. When something goes awry, I want to know why and I want to know how to fix it. Most important, the car needs to be inexpensive. Selling stuff on eBay has not yet made me my first million dollars.

Update: I bought a car. I was looking through Craigslist ads late one night when a Ford Festiva showed up for $500. "Runs Great!" the ad claimed. Manual trans with 81,000 miles on the engine. Consider my attention grabbed. Even if it didn't run "great" as the ad stated, it at least did run. If it wasn't a rust bucket, it would be a good opportunity to buy a repair manual and try to learn something.

I emailed the owner an hour after the ad was posted. An hour after that, I hit refresh and the price was now $850. Additionally, the owner had placed a series of asterisks before and after the title (which is what you do when your car is a real gem.) I emailed again to say I might still be interested at a higher price pending an inspection and provided the price didn't get crazy.

I didn't want to seem overly interested and I didn't want to let a good deal slip through my fingers. A delicate balance was in play. My well-timed and calculated persistence resulted in a test ride and an opportunity to make an official offer for $600. The person selling the car was not a very good negotiator, and managed to reveal all details of other offers, which allowed me to offer the exact price I knew he would take. After changing the advertised price to $850, I naturally assumed that he had an offer in that range. I was pleased that he conversationally informed me otherwise.

The car is now mine, and the associated Haynes Manual is also in my possession. It is running, indeed, but a bit loud and it surely needs a ton of catchup maintenance. In spite of it stalling a dozen times on the way home, and needing to be towed by Triple-A on the maiden voyage, I think I still got a great deal. The repair was cheap (loose connection at the MAF) and the reviews are stellar. There are gatherings of Festiva enthusiasts and there is a wealth of information available on the web. Let the fun and maintenance begin. 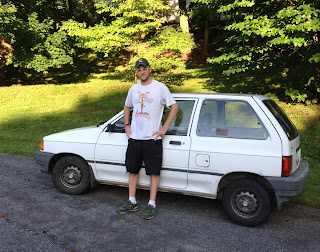 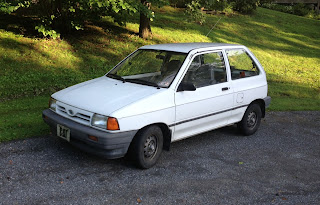 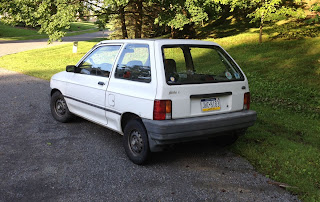 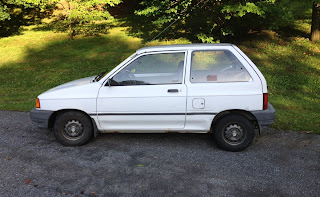 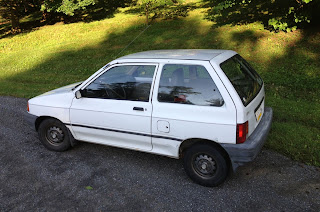 Posted by Pixy Stoneskipper at 9:19 PM

That is an awesome car.