And then the sun came out, and I rode my new bicycle fast. I gave the mental finger to difficulty, enjoyed a large coffee, and turned a radio up to 40, which was loud. I stopped off to get some nitrile coated gloves, because I am working at the bicycle shop this weekend, and I don't want to get grease under my beautiful fingernails.

This wasn't exactly the tone I was trying to set for turning this blog into a bicycle blog, shrug shrug shrug, lemme do this.

I was going to put some more miles on the Jamis before changing it all around. But I couldn't wait. I got the gist of what I was looking for, and going putt putt putt on a bicycle set up for grandpa seemed like a pointless exercise. That didn't sound nice. Again: It's a wonderful bicycle for its intended purpose - going slow and not far on a comfortable and reliable machine.

Now to think about it as a frame, and set that frame up for me...

The first move was to lower the handlebars to about level with the saddle, maybe a hair below. The saddle, tires, and pedals were the first parts to go. I also replaced the cranks. I went for a ride intending to go easy and set a baseline on my usual loop. That plan fell apart quickly, and I nearly ended up with a personal best.

Handlebars: They still need to go. I've lowered them and installed a longer stem. I'll be putting on my preferred Northroad style handlebars at my earliest possible convenience. I'm surprised how much I don't like the flat handlebars. I expected them to be no big deal. My hands went numb in spite of the big ergonomic grips. It didn't make much sense, but they've gonna go anyway.

Saddle: I had a Brooks B17 on another bicycle. The Jamis is borrowing it until we get settled.

Pedals: My friend gave me some colorful "Thermalite" platform pedals as a gift. I am a colorful person who loves bright colors, but I would not have chosen these pedals for myself. I am glad she chose them for me, because now I like them very much.

Tires: I had 700x35c Panaracer Pasela tires on my 3 Speed road bicycle. They barely fit between the chainstays - there was less than a millimeter per side to spare. I made a trade: The Jamis gets the wider Paselas, and the road frame gets the 32c Vittoria Randonneurs.

Crankset: When I go to bicycle swap meets, I walk away with incredible bargains. Among my personal scores in waiting, I had a Shimano XT mountain crankset with no visible signs of being ridden. The model is FC-M730, meaning it was made between 1990-1993. The chainrings are Biopace in 50/38/28. No subsequent design changes cooked up by the bicycle industry have resulted in cranks that are better than these. If there was only one crankset forever, for me this would be it.

The XT cranks introduced two differences for me to examine: Biopace chainrings, and improved q-factor. I wasn't excited about the elliptically-shaped Biopace rings - but they looked brand new, the tooth count was perfect, and they were already installed on the cranks. So I gave them a try. The most surprising thing about them is that I couldn't feel any difference. I like them. They feel like normal chainrings. The 50 tooth big ring and wide 700c tires allowed me to go faster than I am used to before spinning out.

The q-factor of the Jamis's cheap Shimano cranks was wide at 185mm. The XT cranks brought that down to a not-particularly-narrow but still respectable 162mm. I don't know if I can feel the difference, or if psychologically I hate the original clunky looking cranks, and love the Shimano XTs. I tend to doubt most people could tell a difference. Still, I will obviously be keeping the XT cranks on there. They are better in every possible way. 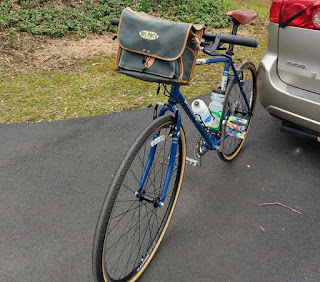 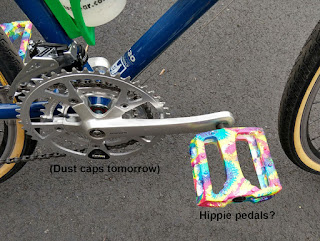 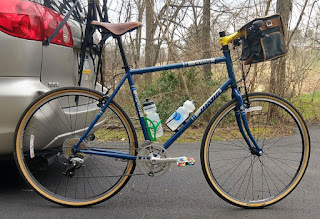 Indexed Shifters: The Jamis comes with trigger shifters. Indexed front shifters can be a pain to set up. I don't mind having clicks for the back. I'm a friction shifting devotee, but an indexed rear is easy to set up, and gives fast and accurate shifting. The front is another matter. Getting the front adjusted to work in all of the sensible gear combinations without the chain rubbing on the derailleur - is annoying. I can do it, but it isn't as easy as it should be. I might keep the 8spd shifter around for awhile, but I don't think the left one will be with us long.

Note about wheels: I didn't stress relieve the wheels when I built up the Jamis. I trued them close enough, and made sure no spokes were obviously loose. I did this because I knew I could work on them later at any time. I wanted to approximate the attention to detail of a less-than-stellar mechanic at a typical average shop. I believe that steps should be taken to achieve a high quality of excellence with every bicycle build. We might as well take a little bit more time and be proud. Where to draw that line is a personal decision to be made by the lead mechanic or owner of a shop. Not greasing the seatpost should be punished by death, but there are gray areas to be found, and I also think some shops go a little over the top. Stress relieving wheels on box builds is something that a lot of shops probably neglect. I neglected it myself as an experiment, and soon enough the rear wheel went out of true and started to hit the brake pad.

Mechanics: Stress relieving and tensioning wheels on box builds should be routine. Shops: if you are skipping this step, you are not a good shop.
Posted by Pixy Stoneskipper at 8:07 PM

I did some reading.reading on the stress relieving of new wheels. seems to be several techniques for doing this, also some disagreement on which way is best, or actually doing anything at all. what is your procedure.

There are different methods, but the important thing is to address the fact that the wheels are built by machine. I hold the wheel at the rim and push the hub axle down on a stool or work bench. I work my way around the wheel. This takes tension off spokes that might be twisted during machine assembly. You will hear popping and pinging as you do this step. Flip it over, do the other side.

When the wheel stays in true, it's done. Handbuilt wheels are better, but this treatment gets it almost there.

The Coda wheels have gone out of true, but aren't terrible. It's like a C+. That grade was fine in school, but not for pride of workmanship.

There might be other methods that work. Doing nothing is roulette at best.

I just took delivery on a 27" alloy front for my Raleigh . built-sold by Wheelmaster, JBI BIKE. says machine built in USA. also states built with SpokeLoc, should I attempt to de stress ? sounds like they use some type of epoxy or something to lock spokes . just wondering if spokes will still untwist ?

SpokeLoc is probably a knockoff Spoke Prep, which just protects threads from getting stuck in the future. With replacement wheels like that, the main thing is to make sure the spoke tension is high enough. If you got it from a shop they should do that for you. Internet, no. Usually the spokes are pretty loose on those wheels. Tension and truing is a good idea. Quarter turns all the way around until it's tight, then stress relieving.