Selling Out, or Stepping Up? Bicycle Parts Lust Examined

Big things are happening at Chris Harne headquarters, and by that I mean minor things, and by headquarters, I technically mean the back bedroom at my parents' house where I am currently residing as a 35-year-old human male. 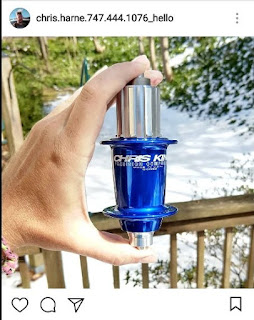 That is correct. I bought a really expensive bicycle hub, and then I took a photo of it in hopes that people would click the little heart.

I have been winning for many years with an impressive ratio of Bicycle Passion to Frugal Bicycle Spending. Like Sia, I love cheap thrills. I've had weak moments where I've allowed lusty curiosity to sneak a muddy paw into my wallet, but usually I am able to backpedal to my Hoopty and sell my indiscretions for a small profit. Is that what is happening here? Quite possibly so.

I have been an enthusiastic bicycle advocate since childhood, and a curious student of all aspects of bicycle mechanics and design since the early 2000s. I arrived at the fundamental conclusion that it does not cost a lot of money to enjoy bicycles. This bears repeating: a bicycle is a tool that anybody can gain access to, which can improve and empower a life, while costing nearly zero dollars. Have you ever been to a bicycle co-op? They are run by heroes.

An understanding of routine maintenance can keep the Right Bicycle going for life. When you find your Right Bicycle, you have found the key to improving your poof of an existence as we hurdle though space on a tiny rock. I have been proving my Right Bicycle theory since 2007, when I began using the bicycle that I affectionately call my "Hoopty" as my go-to bicycle.


..... An aside: It was Drew of Engin Cycles who referred to my bicycle as a hoopty, as in "is that your hoopty with the stuffed animal on it?" His tone wasn't fully derogatory, but he does have a tendency to shit talk a lot of bicycles, and be abrasively opinionated in general. In any case, I adopted the name somewhat later. (Drew maintains a fascinating Instagram, and despite our vastly different personalities, I have huge respect for his work.) Before it was my "Hoopty" it was referred to as "Tall Cool" - a name coined by Lael, a fantastic human in all regards, who meant it in an endearing, respectful, and humorous way. Tall Cool was the name of the at-that-time stem in the J&B Importers catalog. Maybe I'll make an effort to start calling my bicycle Tall Cool again, in spite of the fact that the namesake stem was swapped out ages ago.....

In 2011 when I rode a three-month tour, I purposely eschewed fancy equipment to prove that it doesn't require expensive gear to travel by bicycle. I proved it. Actually, much poorer people, with a much better capacity for shrugging off difficulties, have proven the point before. The major difference is that my trip was unhindered by equipment failure of any sort, and aside from two flats that I patched, I cruised all the way across the country with relative aplomb. To be a bicycle mechanic on a bicycle tour is a beautiful thing. To be familiar with a bit of routine maintenance gets you 95% of the way there - but if you can help others with their bicycles as well, they will often reward you with pie.

I bought a Chris King hub a few days ago. It cost more than most people are willing to pay for an entire bicycle. It will not bring peace or fulfillment or meaning to my life. It will not make my bicycle faster. There are three reasons I decided to buy it anyway: