Pedalling an 80ft Snake with Bike Zoo in Austin TX

If you love bicycles and live your life with an open heart, opportunity will present itself. Sometimes opportunity comes in the form of an 80-foot-long pedal-powered bicycle snake. I stood near some picnic tables in Austin Texas, under the I-35, in a park beside the pedestrian path that circles Lady Bird Lake. Downtown. I was standing alone, about twenty paces from the reefer and beer. I wanted to be social, but it had been less than a week since I decided to stop drinking. I wanted to ride back to my van and hide under my blankets, but I knew that my severe momentary anxiety would melt away once we began to ride. Then there was a welcome distraction. Bicycle Snake to the rescue!

Slowly... a huge rolling sculpture, illuminated by rope lights, curled and slithered to a stop about ten feet from where I stood. I counted six bicycle seats including the captain. The welded structure had pivot points along the length of the frame, allowing it an impressively tight turning radius. The ribs of the snake were made from long strips of corrugated plastic, with a twist midway to add structure and make the curved sides of the snake more realistic. The ends of the corrugated plastic ribs were attached to long sections of bungee rope running the length of the snake. The head of the snake was created by stretching white knit fabric over a frame of bent tubing in the shape of the head of a snake. The eyes of the snake were made from green lens covers from a traffic signal. I didn't know this until later, but the head is also hinged to reveal fangs made from two cow horns. The length of the snake is supported on heavy duty pneumatic wheels and axles like you would find on an industrial hand truck or cart. Each of the five seats behind the captain has a set of pedals which drive a coaster brake hub, which in turn drives the axle. So each snake-driver inputs propulsion power and stopping power independently, and this is communicated verbally when it isn't plainly obvious what to do. The captain yells "Pedal Harder!" "Coasting!" or "Braking!" It is a simple elegant system. Only the captain can steer.

I walked up to one of the snake-drivers once the snake was in park, and he had exited through the ribs. "Nothing to see here" I shrugged, "just a huge light-up pedal-powered snake... business as usual." I was trying to strike up any sort of conversation. I was already far outside my comfort zone just standing there, and I was desperate for positive human interaction of any sort. Before the snake arrived, I was feeling my brain melt down my neck into my stomach and wondering if you could vomit from feeling alone in the world. I was here for the eventual healing power of bicycles, and an incredible and whimsical Bicycle Snake rolled right up beside me, so I thought the right move would be to listen to the universe and say hello. Turns out everybody on the snake was socially awkward, most of all the builder and captain of the snake himself, though if you skip ahead 24 hours, I grew to like him very much. I was in no mental position to radiate positive social vibes, and I wasn't quite sure how to break the ice with the snake-drivers, but I was given a brochure, and I overheard the snake-captain telling somebody that if they emailed him, they could help propel the snake in the upcoming days.

Shortly after this, the social ride began, and my anxiety melted away instantly as I maneuvered in a peloton of goofballs in a swift ride all over Austin. Bicycles are medicine. Bicycling makes your body produce its own natural medicine, and I do not know where I would be in life without bicycles. Probably hiking. Like a fool.

After the ride, I returned to Hotel Sienna, my minivan, and emailed the captain of the snake. The next morning, I received a reply requesting that I text during daylight hours. I complied with this request, and hit paydirt: the Bicycle Snake would be rolling out from a private residence to the north at 6 p.m.

I bicycled early to the start. It began to dawn on me that I had vastly overestimated the demand for pedaling a giant snake. I assumed there would be a waiting list, and even thought there might be a fee of $20 or so for the opportunity to help pilot this incredible work of sculpture. No. They need people to volunteer, sometimes they pay people, and if you think it's easy, think again. I have pedicabbed, and I am no stranger to the loaded touring bicycle, and let me tell you - pedaling an 80 foot steel snake is hard work. I had no idea of the route or plan. I estimated an hour or two of teamwork at an effort somewhat comparable to an out-of-tune beach cruiser. I prepared by eating an avocado and planning to work up a bit of an appetite before dinner. The reality was closer to four hours, with the difficulty sometimes approaching dragging a sled of bricks over a hill. I had an enormous amount of fun for the first two hours. The remaining two hours were a steady decline until I felt like my ghost was leaving my corpse. If you are planning to pedal a sculpture any time soon, bring a Clif Bar at least.

We cruised away from the residential location, and I was immediately having the time of my life. I was in the second to last seat in a giant snake, and I felt like I was part of a team of heroes. 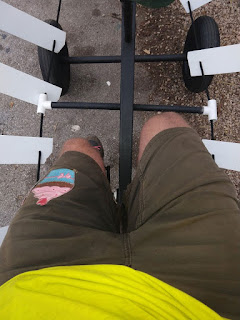 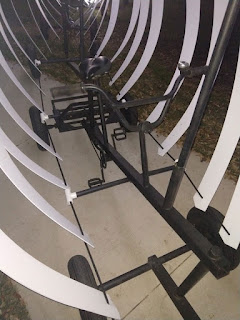 The purpose of the snake ride was to increase awareness that the snake exists, and maybe somehow leverage that public awareness into creating opportunities to make money with the snake. Festivals? Rent out the snake? The profit side of the equation was not exactly ironed out, but it was clear that the first step was to ride the snake in public. As an attention-getting device, I defy anybody to conceive of something more effective than the snake. As far as clear message delivery, put simply, there was none. Thousands of people took photos and video of the snake as we pedaled it around downtown Austin. It was during the SXSW music festival, and the streets and sidewalks were overflowing with attendees who were in the mood to party and get down. There was not a single cellphone camera not trained on the snake. The public seemed extremely aware that a pedal powered snake existed, but as a promotional device the snake did not offer much. Nobody knew to hashtag something, and aside from silliness and whimsy, there was no clear point being broadcast. Sometimes people would shout "What is it???" and in response, the person in front of me would shout "Bike Zoo!" The captain and creator is a talented builder and pilot, but his comfort with promotion, he will freely admit, is not his greatest strength.

After about three hours I wanted to drive that snake off a bridge. My energy had evaporated, my blood sugar was low, and my knee was acting up because I didn't respect proper seat height from the outset. I was bonking out inside a snake while slithering and circling down Congress Ave. I had the Strava app recording our track, mostly because I have a goal to ride at least 100 miles per week. I looked at my phone, and saw that we had been pushing that fucking snake for twenty miles. I was jealous of the pilot, because unlike the rest of us, his chain was driving a three speed hub gear. I thought about killing him. Not really. I just needed tacos - a lot of them and immediately.

Eventually we parked the snake, and even though I could hardly stand up straight, I was mostly still happy to have survived the experience. Our pilot was in high spirits. Everybody loves the Bicycle Snake! Also, he had been shifting that goddamn 3 speed hub the whole time. [Recommendation for snake improvement: smaller chainrings.]

Activities like pedaling the snake are the primary reason I remain excited to be alive. There are infinite possibilities in life. If you live with an open heart and mind, and try to stay above the bullshit and distractions, you might find yourself pedaling a giant snake amidst a sea of cheering revelers with cameras flashing like the paparazzi.

I got back on my own bicycle, which now felt as light as a styrofoam takeout container, and rode directly to the nearest taco truck, where I ordered a survival soda and a plate full of tacos. 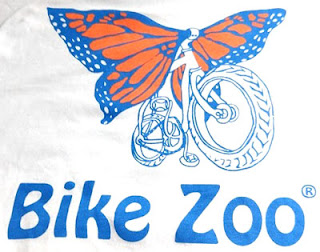