Catching Up With Clive Cussler.

I joined a society which one year ago I did not know existed. The Clive Cussler society is a dues-paying group with an email chat list. When I got tired of pressing a glass to the wall, I paid my dues and was invited into the inner circle. This afforded me the opportunity to purchase a fantastic hat: 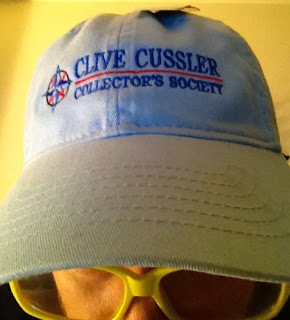 I'm an anthropologist at heart, but a curious goofball by nature. In either case, I had to know what was happening in the minds of Clive Cussler's biggest fans.

I read "Shock Wave" in 1996. I was impressed by the intricacies of the plot and the fortitude of Dirk Pitt - Clive Cussler's greatest serial hero. After Shock Wave, I bought the next 50-cent Clive Cussler book that I came across. It was while reading Sahara that it began to dawn on me that all of Clive Cussler's books might be the same. There is a formula.

I stopped reading Cussler books, but I continued to take notice of them. New ones sprouting up all the time; old ones from the 1970's being sold for a dime. Clive Cussler doesn't have the most titles - what interests me is the machine that he has built. He now co-authors with several other men, including his now-grown son, Dirk Cussler. The machine is now a family business, and it churns out several new titles every year.

I wonder about the details of the writing process. I am curious about the nature of the communication between co-authors, and I would be interested to learn how much weight rests on the shoulders of Cussler himself, now in his 80's. I want more information about the demographic of those who join the Society. (I think it's mostly just rich men with Doxa diving watches.)

With nowhere else to turn, I have decided to begin reading all the books. The first Dirk Pitt adventure was written in 1973, and I am moving in chronological order by series.

Based on Amazon.com reviews, and the fact that I've read "Shock Wave," I am getting the picture that Clive Cussler's writing got better with practice. The early books - I've read three so far - are quaint with a tendency to include wince-inducing passages. In the first three books, we establish that Dirk Pitt is a misogynist who is immune to bullets. While reading these books, I've found that I am not rooting for the main character so much as standing on the sidelines with my jaw slightly agape.

Forging ahead: I am now preparing to begin "Raise The Titanic!" In his previous adventure (captured in "Iceberg"), Dirk Pitt faked extreme stereotypical homosexuality in order to lower the defenses of the evil people who were planning to take over the world. He braved some bullets and unfortunate slurs, but his pulp-beaten bones healed enough for him to fuck a woman at the end. I hope the next adventure is equally incredible.
Posted by Pixie Morningdust at 2:10 PM